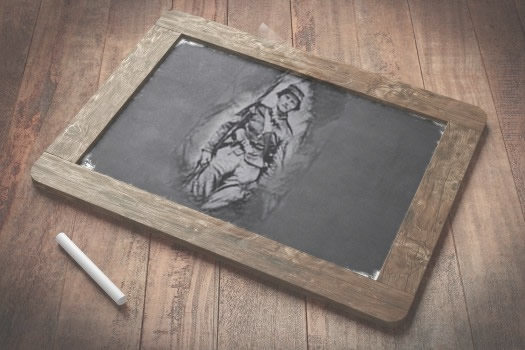 Hattie Howell is spitting mad; the boys in her class are making fun of her chalk drawings again. When Arthur Phelps reaches for her chalkboard, she yanks it back with all her might, accidentally hitting him with her elbow above the right eye making a loud thunk heard throughout the room. Embarrassed more than pained, Arthur dashes out the classroom door, holding the growing lump on his head, his hysterical pals trailing close behind.  Miss Clark, busy at her desk, pretends not to notice.  As the boys leave the room her eyes meet Hattie’s, a slight grin on both their faces.

The youngest of five children, 12-year-old Harriet “Hattie” Howell, loves school and adores her teacher, Miss Clark. Precocious with an artistic bent Hattie has a mind of her own and is not afraid to express it. In the tiny farming town of Hector, New York, everyone knows Hattie and thinks her demeanor and behavior are far from proper for a girl her age, everyone that is but her mother Charlotte and teacher Miss Clark.

Since the death of her sister Jennie from scarlet fever several years ago, Hattie has been preoccupied; some would say obsessed with another death, the death of her father. All anyone knows is that Hannibal Howell, age 37, was last seen alive at the edge of a cornfield along McPherson’s Ridge in Gettysburg, Pennsylvania, on the morning of July 1, 1863. Hannibal was a soldier in the Union Army of the Potomac, New York 76th Regiment Company C. Outflanked and outnumbered by Confederate troops; the 76th was the first to see action that day in one of the bloodiest battles of the Civil War. Within the first twenty minutes of fighting regiment commander, Major Andrew Glover was shot and killed along with nearly half of the New York 76th. Regrouping in the shelter of an unfinished railroad bed, the 76th fought back aided by the New York 147th and the Pennsylvania 56th regiments. By nightfall, Union troops had retreated to Cemetery Hill. The dead and wounded laid behind Confederate lines for the remainder of the three-day battle, Hannibal among them.

What happened to her father and why is what’s gnawing at Hattie. His body was never recovered, his final resting place unknown, his last words unheard; these thoughts haunt Hattie. How could he die and leave his family behind? Why did he go off and leave her, a daughter he never knew? Strong-willed Hattie Howell wants answers, needs answers.

Follow along as I document the process of writing the story and book posted in the Creating Hattie’s War section of this website.