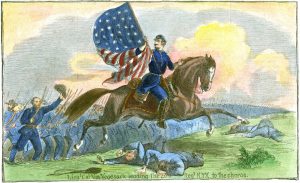 It’s said that no other topic has more written about it than the American Civil War.    Every aspect of the war has been documented, dissected, debated, and written about for the last 150 years.   What could I possibly add of value to that legacy?   I’m no expert but I believe I have a story worth telling, it’s as simple as that!

Anyone writing about the Civil War must have a grasp of the conflict’s timeline: the who, when, and where of the war.  For my purposes, I only need to track the war until Gettysburg, that is where the war part of the story ends. Luckily the Internet has just about all I need, it is a great place to start.  Reputable resources abound, it is not hard to find accurate, well presented information.  Here are a few sites I found helpful:

Finding information is easy, the challenge for the Civil War novice is keeping track of who is who.  Generals come and go on both sides, officers fall on the battlefield and are replaced.  The crazy thing is, high-level officers on both sides know one another, many attended West Point or served together in other conflicts. Think of it as going to war against the guys down the hall in your college dorm.

It’s also helpful to know army command structure:  a Company is part of a Regiment which is a part of a Brigade, that makes up a Division that is part of a Corps, that is the Army.  Why do you need to know this?  Descriptions and maps of various battles often reference troop movements at the brigade or division levels, typically called by the commanding officer’s name.  Since brigades and divisions also have official number designations, they can also be referred to by number.

At Gettysburg, the NY 76th (and Hannibal Howell) was part of the 2nd Brigade, commanded by Brigadier General Lysander Cutler, sometimes called “Cutler’s Brigade“.  The NY 76th was part of the 1st Division, 1st Corps at that time.  The commander of the 76th Regiment was Major Andrew J. Glover.  Major Glover was the pastor of the First Methodist Episcopal church in Cortland, NY prior to enlisting.  Shot 4 times at the Battle of Gainesville he returned to command shortly before Gettysburg.  He was shot along with his horse and killed at about the same time as Hannibal, in the first 30 minutes. Captain John E. Cook took command.

Further muddying the water, brigades can be referred to by nicknames like the “Iron Brigade”, “Lightning Brigade”, “Excelsior Brigade”, “Irish Brigade”, to name a few.

So… now you know!